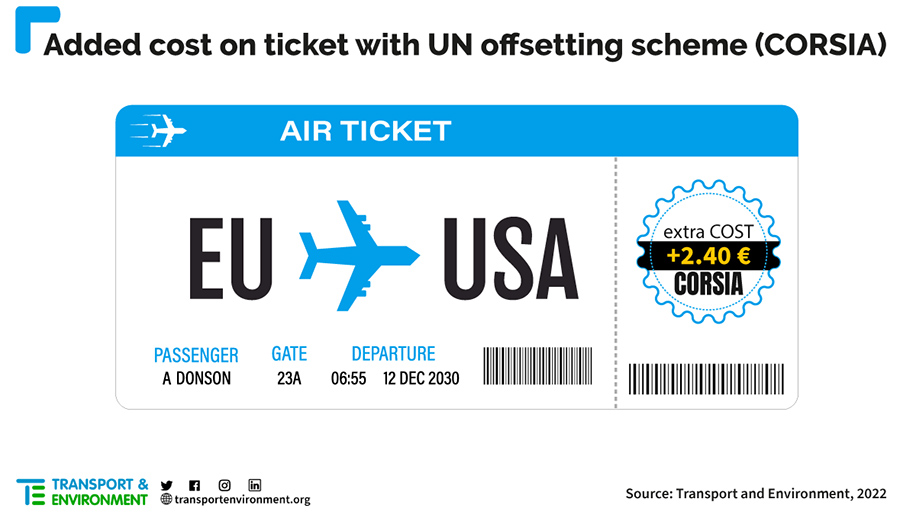 The new analysis looks at compensation offered through the United Nations International Civil Aviation Organization (ICAO). These add, on average, just €2.40 to the price of a one-way long-haul flight according to research.

ICAO is the UN body charged with reducing global emissions from aircraft. It uses a system of purchasing emissions offsets that “so far has proven totally ineffective in reducing the climate impact of aviation.”

New analysis from Transport and Environment shows that on a flight from Europe to the United States, passengers on average would have to pay just €2.40 to offset their carbon emissions in 2030. On a flight to the Middle East, the additional cost per passenger it would be €1.40; to China, €3.50.

Such amounts are inadequate when considering the cost of decarbonizing the aviation industry, says Transport and Environment.

Environmental groups have for years questioned the use of offsetting as a means of reducing aircraft emissions.

CORSIA relies on airlines paying to offset any growth in emissions above a certain baseline. Originally, this baseline was going to be the average emissions from 2019 to 2020. As a result of the Covid-19 pandemic, when flights, and therefore emissions, were much lower, this would have meant a line much lower based, so ICAO changed it. until 2019 only. If this weaker 2019 baseline holds after the CORSIA pilot phase that runs from 2021 to 2023, the per-passenger cost of flights to the US is even lower: €0.80 in 2030.

The total cost for all airlines operating flights from the European Economic Area (EEA) to the US to offset their emissions under CORSIA is expected to be €118 million in 2030, which is just 0.4 percent of its total operating costs in 2030.

For those airlines operating flights from the EEA to the Middle East, buying offsets would cost €40.3 million in 2030, a figure that represents 0.3 percent of total operating costs.